Diane's recordings are available in many places. To buy a physical CD, contact us (click on the words contact us and you will be whisked to the right page). To buy digital downloads of entire albums or individual songs, visit Amazon.com, iTunes, or other outlets. Most streaming services feature Diane's songs.

If Ever I Would Leave You
(single)

This masterpiece from Camelot was written by Alan Jay Lerner and Frederick Loewe. Its rising lines capture rapture in a most wonderful way. Peter Tillotson's great bass and Billy Novick's smooth-as-silk clarinet weave a soft comforter of reassurance.

Getting a tad tired of the same old faces? Dance the Aggravation Tango! There's really only one tango melody with several variations, and mine is based on La Cumparsita, which means "little parade," written in 1920.

I just love seeing if songs work on the dulcimer, which I play in a nontraditional way. Bobby Darin's Dream Lover has a fabulous chorus, which I accented by slapping the strings (gently). Larry Luddecke provides a soft cushion, playing his usual wonderfully sensitive piano, and Peter Tillotson's bass is always just right. Thanks, guys!

Back in January 2021 Diane and her husband thought they had sold everything from his mother's condo, but to their dismay discovered a kitchen drawer still chock full of knives. He grabbed a little travel suitcase and dumped the whole lot in there, and we left it at Goodwill with a devilish chuckle thinking of the surprise awaiting the person fated to open it.

The image of that rattling cutlery stuck with Diane and eventually produced this song. The key line is "not what you expected," which kinda sums up life as we know it.

Rockin' Out on Star Island

Available only as a physical CD from Diane, this is a private-issue love letter to a little rock in the Atlantic that she has visited each year for over two decades. About half the songs are new, and half are on other of her recordings. Billy Novick works his whistle magic on her setting of Celia Thaxter's "The Sandpiper," and Larry Luddecke plays sneaky keyboard on "Chickens and Bears," about those who jump into the ocean (Polar Bears) and those who shudder at the notion (Polar Chickens). John Yannis sets the perfect Victorian mood with his piano accompaniment for "Good-bye, Sweet Day!" -- a song that has been serenading the sunset at Star for nearly 150 years.

Diane's many sea-faring songs in one place. In addition to favorites from previous releases, she adds "Lady Franklin's Lament," whose timeless melody has been used many times over, and "Leave Her, Johnny," traditionally the last chantey sung as sailors left a ship.

Diane gathers her Irish and Scottish selections into an album full of sparkle and passion. All the tracks come from her previous releases, but if you're in a Celtic mood this is the one for you!

Perky ditties from the 1920s, bluesy beauties, and some early rock & roll. You get the title track, plus "Georgia on My Mind," "God Bless the Child," "Someone to Watch Over Me" in French, and Fats Waller's "Ain't Misbehavin'." Billy Novick plays clarinet and sax, Bill Reynolds bashes the drumkit, Larry Luddecke tickles the ivories, Peter Tillotson massages the bass and toots the Sousaphone, Mike Duke caresses the guitar strings, and Eric Kilburn adds some tasty mandolin. All this misbehaving happened at Eric Kilburn's Wellspring Sound, home of old-school mics and a brilliant grand piano.

Powerful songs that celebrate the companions who accompany us on life's journey. It's a perfect way to memorialize loved ones, with velvety vocals, angelic fiddle, and gospel-tinged piano.

What Is the Wind?

Striking songs from Diane's youthful pen, plus newer creations and Diane's intense versions of traditional gems. Some are sung and played as gently as the brush of a bee's wing, and others rise into power to invoke many moods. Featuring Peter Tillotson on bass, Billy Novick on whistle, and amazing work by fiddler Bronwyn Keith-Hynes.

Classics of American song, from lovelorn to joyful to downright silly. Diane is backed by a tight combo of studio masters: Mike Duke on guitar, Peter Tillotson on bass, Steve Langone on drums, Eric Kilburn on mandolin, and jazz/folk legend Billy Novick on clarinet. Several songs are in French, the language of love. Recorded at Eric Kilburn's Wellspring Sound with fabulous mics and old-fashioned reverb created by a box of springs on the roof.

Making songs by others completely her own, Diane collaborates with talented musicians on this 70-minute delight. Memorable arrangements and superb musicianship create unforgettable versions of Diane's original songs, as well as traditional classics, French gems, and the pure fun of "Let's Go Canoeing on Lake Chargoggagoggmanchauggagoggchaubunagungamaugg" (it's a sing-along).

Beat of the Heart

The title track celebrates the universality of music, and Diane's settings of Dylan Thomas' "Fern Hill" and Longfellow's "The Children's Hour" capture the fleeting magic of childhood. "The Sea-Serpent of Cape Ann" tells of New England's version of the Loch Ness monster. "The Wreck of the Caspian" is based on a true story of a shipwreck off the Florida Keys in 1857, in which a resourceful mother saves the ship's company with a ball of twine and a little dog. We visit old Quebec with "Les Filles du Roi" and two traditional songs in which Diane weaves together the French and her own English translations. Irish and Scottish songs round out this trip through time, plus a fun version of "Froggie Went a-Courtin'."

Some of Diane's most powerful poetry and melodies are here, along with her gorgeous arrangements of traditional songs. She tosses in a dark, bluesy cover of Steve Goodman's "Lookin' for Trouble," her vibrant bluegrass chugger "Full Moon Tonight," and a folk approach to "Heard It Through the Grapevine."

Diane's first CD features her well-loved "Raisin Pie," with the incomparable fiddle playing of Johnny Cunningham. He also enriches "Be Here." Other highlights are "Amaryllis" and &quotSilver the Moon."

Songs of the Revolution

A 21-song salute to the music of 1776!   Diane presents the finest melodies of colonial America that show many aspects of life long ago. Music was a powerful force, promoting rebellion or loyalty to the crown. Here are the voices of Redcoats and rebels -- enjoyed by masters and servants alike -- heard in kitchens and workshops, military camps, churches and taverns as the old order was swept away by new ideas about the meaning of liberty. Jonathan Gilbert spices things up with vocals and various instruments.

Classic songs from a momentous time, presented with an exquisite simplicity that lets their beauty and passion shine through. Hauntingly beautiful vocals, brisk harmonies, elegant guitar, vibrant dulcimer, gorgeous harmonica, impertinent jaw-harp, and (of course) the ol' banjo. These songs reflect the diversity of women and men from all walks of life as they struggled through a dark yet inspiring time.

Using compelling songs sung by ordinary people in centuries past, Diane explores the lives of women in Europe and America from 1500 to 1850. Women left few written records, but we can learn much about them through the music they used to speed their work, lift their spirits, or ease an aching heart. Sixteen gorgeous traditional melodies, many sung a cappella, others with guitar or dulcimer.

Supremely beautiful carols from the Victorian era, when Christmas first became a widely celebrated holiday. Enjoy the original versions of today's beloved songs and the fascinating stories behind them. (Did you know "Jingle Bells" started life with a different, more athletic melody?)

A midwinter bouquet of carols and folksongs on voice, guitar, dulcimer, piano and kalimba. Their timeless beauty, good cheer, and pure sentiments transcend the Christmas story to embrace our age-old yearning for light and warmth in the long winter. Listen and bask in the glow of ancient fires.

Diane collaborates with Jonathan Gilbert on music that spans centuries of year-end celebrations -- as far back as the 1200's and as modern as the new verses Diane adds to "Deck the Hall." These selections capture the holidays' many moods: rowdy, whimsical, devout, serene. Many instruments make for a lively and lovely set of melodies, with exquisite harmonies.

For the Wee Ones

A delightful collection of songs for the very youngest music lovers. Along with the classics, such as "I'm a Little Teapot," Diane offers her updated "I'm a Little Microwave" and "The Bee Song." This array of songs is guaranteed to delight the kids but won't drive their parents crazy! The first two-thirds is for bouncing and dancing; the last part soothes 'em into sweet slumber.

(The physical CD is out of print; downloads and streaming only.)

Diane's version of "Oh, Susannah!" was included on Putumayo's album American Playground in 2013. 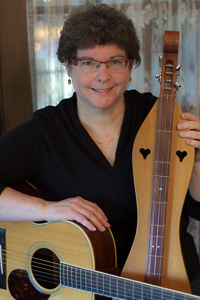