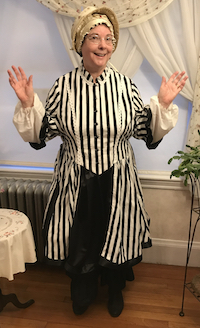 The young United States faced many vexing social issues, but first and foremost was the fact that the claim of the Constitution that "all men are created equal" did not apply to the millions of enslaved people on whom the wealth of the country depended, and certainly did not apply to women. Movements soon formed to agitate for freeing those in bondage and to grant women the vote. The two efforts became entangled, and the story of their interaction is filled with momentous events and fascinating people.

Many songs were created to advocate for suffrage for women, used by groups that held conventions promoting the cause, the first in 1848 in Seneca Falls, New York. Progress was slow, as societal norms dictated that women always defer to men. A brief fad of clothing that allowed women greater freedom of movement, the bloomer outfit, was ridiculed and violently suppressed.

It took until 1878 for an amendment to finally reach Congress, but it was repeatedly defeated. More forceful tactics were adopted by younger leaders who held marches and picketed the White House. Arrests and abuse in jail increased public sympathy for the cause. President Wilson finally gave reluctant support when the First World War demanded that women take on new roles.

The 19th Amendment finally became law in 1920, 41 years after it was first proposed in Congress. Ratification was achieved by a single vote.

Diane performs in a bloomer outfit and accompanies songs on guitar: 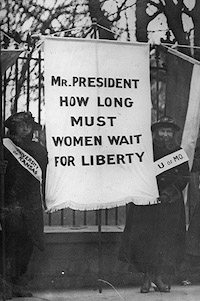