Susan Brownell Anthony grew up in a Quaker family with long activist traditions, and she soon developed a sense of justice. After teaching for 15 years, she became active in the temperance movement, working to reduce the terrible effects of alcoholism on women and their families. Because she was a woman, she was not allowed to speak at temperance rallies. This led her to dedicate her life to fighting for women's rights, especially the right to vote. She also worked to change the fact that women could not own property or keep their earnings if they were married.

Ignoring opposition and abuse, Susan traveled the country giving lectures, pushing against the common opinion that women could not and should not speak in public. She lived almost entirely on the fees she earned as a speaker.

She also worked hard for the abolition of slavery. Mobs repeatedly shut down her meetings in 1861, and in Rochester the police had to escort Anthony and others from the building for their own safety. In Syracuse, according to a local newspaper, "Rotten eggs were thrown, benches broken, and knives and pistols gleamed in every direction." Susan was part of the Underground Railroad, and in her diary in 1861 she wrote, "Fitted out a fugitive slave for Canada with the help of Harriet Tubman."

Susan B. will make an impression in any gathering. She saw the end of slavery, but did not live to see women win the vote in 1920. But she put her life on the line to make the world a better place. 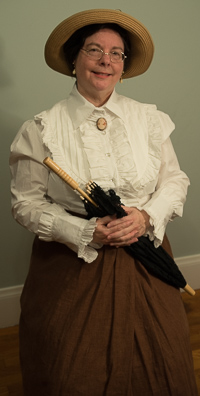