Clara Barton overcame great shyness as a youth to become a bold and skilled organizer, active in public life in a way few women were. A teacher before the Civil War swept through the country, she became known as "the Angel of the Battlefield," carrying vital supplies to the front and organizing nurses to help overworked surgeons in field hospitals. After the war she ran the Office of Missing Soldiers, which located more than 22,000 missing men and buried them with dignity. Her office also identified and buried over 30,000 men who had died at the notorious Andersonville prison camp in Georgia.

Clara did things no woman had ever done before, both on the battlefield and in the government. In 1882 she founded the American Red Cross, despite the prevalent view that the nation would never again face a calamity such as the recent war. She persisted, arguing that the organization could respond to crises such as storms, fires, and earthquakes. And so it has, for 135 years.

Clara Barton's determination and willingness to break down barriers, all in the name of helping others, earned her an enduring place in the hearts of Americans. She is happy to tell stories from her long and eventful life, whilst wearing proper lace gloves, of course. 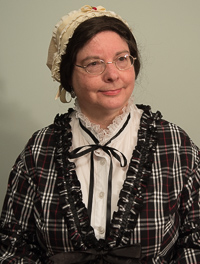